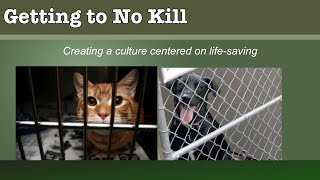 Watch: Getting to No Kill

"The No Kill Movement is sweeping the country. And we should all be really excited about it! This map shows all of the places in the USA where all of the animal shelters have stopped killing healthy or treatable pets, which is great news, because not that long ago, there weren’t any of those.Today, there are more than 140 cities and counties where all of the shelters are No Kill. But, what does that mean? How did they do it? And what’s taking all of the other shelters so long
No Kill Learning

On January 15, 2019, Lake County, Florida celebrated the 2 year anniversary of its transition to no kill. When they did, it was like switching on a light. On that day, the Lake County Board of County Commissioners took control of the open-admission animal control shelter and immediately, the killing of healthy and treatable animals stopped. As exciting as that is, the real story began five years before that day, when local advocates, inspired by two teen-aged sisters, set out
No Kill Learning

Advocate: 'It is really sad they never tried this hard to save lives'

In Pueblo, Colorado, the old guard has tried desperately to cling to power as the No Kill timeline kept moving forward. There is much we can learn from this. On Monday, December 3, 2018 the City Council of Pueblo, Colorado voted to award a 3-year contract to Paws for Life, a No Kill animal shelter, to run the City's animal shelter and animal control operations. Prior to the vote, the Humane Society of Pikes Peak Region had held the contract for about 18 years. What prompted t
No Kill Learning

Pueblo, Colorado: Moving Along The No Kill Path

I just returned from an inspiring event in Pueblo, Colorado. It was inspiring to me for many reasons, most importantly, I love meeting people whose hearts and minds are synced up with the social change that is needed in order to reform animal shelters. Social change is hard and often thankless work. The same can be said for animal rescue. By definition that means that the people who work for social change in the field of animal rescue/animal sheltering have to be a unique bre
No Kill Learning

Traditional Animal Shelters: You're Invited to the Party!

In my decades of work in the No Kill Movement, one thing has always struck me as odd: why do traditional animal shelters resist the transition to No Kill? I have sat and watched as animal shelters and national organizations that profess to be concerned with the welfare of animals have continually resisted basic reforms that would save more animals' lives. And, they have often done so in fairly hostile and aggressive ways. And, as shocking as that may be, it is even more sta
Mike Fry

The Easy Path to No Kill

A Certified Euthanasia Technician (CET) recently talked to me about the euthanasia decision process at the shelter where she works. She desc
Mike Fry

Identifying the Sources of Inertia that Weigh Down Shelter Reforms

I recently wrote about the fact that a significant amount of inertia exists in society that weighs down or inhibits people or organizations from adopting new technologies, including animal shelter reforms. Specifically, I wrote: More animal-friendly branding aside, to this day, a great deal of inertia exists to keep the industry from evolving from "dog pound" to true "animal shelter," and it comes in many forms and from a variety of sources. That blog was more broadly about w
Mike Fry

Anyone who has followed the constant release of new smart phones from companies like Apple and Samsung knows that different people adopt new technologies at different speeds. There are those who absolutely "must have" the latest and greatest iPhone, while others are still carrying around old flip phones. The field of animal sheltering is no different. There are shelters that represent the early adopters of new technologies, in other words, the pioneering leaders in the indust
Mike Fry

Flipping the No Kill Switch in Lake County, Florida

Photo: The Bell of New Beginnings hangs in the lobby of the Lake County Animal Shelter. Each time an adoption occurs, staff there ring the bell. The bell is a symbol of a new beginning for each new pet adopted. It is also a representation of a whole new beginning for this shelter. On January 15, 2017 new leaders took the keys to the municipal animal shelter in Lake County, Florida and walked into the building with a new staff and a new mission: save the lives of every healthy
{"items":["5cfa73a6e0f82c00154d6aa6","5cfa73a6fc4fc0001592a983","5cfa73a61c397f001552959e","5cfa73a6dbdd2e001695b4d9","5cfa73a6dbdd2e001695b4d8","5cfa73a64b04e20014eedb72","5cfa73a6dbdd2e001695b4da","5cfa73a6e0f82c00154d6aa7","5cfa73a6abecf10015ca0cdf"],"styles":{"galleryType":"Columns","groupSize":1,"showArrows":true,"cubeImages":true,"cubeType":"fill","cubeRatio":1.3333333333333333,"isVertical":true,"gallerySize":30,"collageAmount":0,"collageDensity":0,"groupTypes":"1","oneRow":false,"imageMargin":32,"galleryMargin":0,"scatter":0,"rotatingScatter":"","chooseBestGroup":true,"smartCrop":false,"hasThumbnails":false,"enableScroll":true,"isGrid":true,"isSlider":false,"isColumns":false,"isSlideshow":false,"cropOnlyFill":false,"fixedColumns":1,"enableInfiniteScroll":true,"isRTL":false,"minItemSize":50,"rotatingGroupTypes":"","rotatingCropRatios":"","columnWidths":"","gallerySliderImageRatio":1.7777777777777777,"numberOfImagesPerRow":1,"numberOfImagesPerCol":1,"groupsPerStrip":0,"borderRadius":0,"boxShadow":0,"gridStyle":1,"mobilePanorama":false,"placeGroupsLtr":true,"viewMode":"preview","thumbnailSpacings":4,"galleryThumbnailsAlignment":"bottom","isMasonry":false,"isAutoSlideshow":false,"slideshowLoop":false,"autoSlideshowInterval":4,"bottomInfoHeight":0,"titlePlacement":"SHOW_ON_THE_RIGHT","galleryTextAlign":"center","scrollSnap":false,"itemClick":"nothing","fullscreen":true,"videoPlay":"hover","scrollAnimation":"NO_EFFECT","slideAnimation":"SCROLL","scrollDirection":0,"scrollDuration":400,"overlayAnimation":"FADE_IN","arrowsPosition":0,"arrowsSize":23,"watermarkOpacity":40,"watermarkSize":40,"useWatermark":true,"watermarkDock":{"top":"auto","left":"auto","right":0,"bottom":0,"transform":"translate3d(0,0,0)"},"loadMoreAmount":"all","defaultShowInfoExpand":1,"allowLinkExpand":true,"expandInfoPosition":0,"allowFullscreenExpand":true,"fullscreenLoop":false,"galleryAlignExpand":"left","addToCartBorderWidth":1,"addToCartButtonText":"","slideshowInfoSize":200,"playButtonForAutoSlideShow":false,"allowSlideshowCounter":false,"hoveringBehaviour":"NEVER_SHOW","thumbnailSize":120,"magicLayoutSeed":1,"imageHoverAnimation":"NO_EFFECT","imagePlacementAnimation":"NO_EFFECT","calculateTextBoxWidthMode":"PERCENT","textBoxHeight":0,"textBoxWidth":200,"textBoxWidthPercent":50,"textImageSpace":10,"textBoxBorderRadius":0,"textBoxBorderWidth":0,"loadMoreButtonText":"","loadMoreButtonBorderWidth":1,"loadMoreButtonBorderRadius":0,"imageInfoType":"ATTACHED_BACKGROUND","itemBorderWidth":1,"itemBorderRadius":0,"itemEnableShadow":false,"itemShadowBlur":20,"itemShadowDirection":135,"itemShadowSize":10,"imageLoadingMode":"BLUR","expandAnimation":"NO_EFFECT","imageQuality":90,"usmToggle":false,"usm_a":0,"usm_r":0,"usm_t":0,"videoSound":false,"videoSpeed":"1","videoLoop":true,"jsonStyleParams":"","gallerySizeType":"px","gallerySizePx":940,"allowTitle":true,"allowContextMenu":true,"textsHorizontalPadding":-30,"itemBorderColor":{"themeName":"color_12","value":"rgba(244,239,225,1)"},"showVideoPlayButton":true,"galleryLayout":2,"targetItemSize":940,"selectedLayout":"2|bottom|1|fill|true|0|true","layoutsVersion":2,"selectedLayoutV2":2,"isSlideshowFont":false,"externalInfoHeight":0,"externalInfoWidth":0.5},"container":{"width":940,"galleryWidth":972,"galleryHeight":0,"scrollBase":0,"height":null}}